What happened to monkeypox? The LGBTQ community seems to have canceled the spread for now | app

Building a sense of shared future is important for the world to avoid fragmentation and overcome challenges, and for Asia to safeguard peace and promote common development, former Japanese Prime Minister Yukio Hatoyama said.

In a recent interview with Xinhua, Hatoyama said building a sense of shared future is important for the world to avoid fragmentation and overcome challenges, and for Asia to safeguard peace and promote common development.

Hatoyama recalled that in 2012, when China and Japan celebrated their 40th anniversary of normalizing diplomatic ties, he met then Chinese Vice President Xi Jinping during his visit to Beijing in March. . “Xi is a far-sighted leader with a broad vision,” he said.

Hatoyama has praised the idea of ​​a community with a shared future for mankind and repeatedly expressed his strong support. “On the earth we live in, not only does the environment work as a whole, but people are also interconnected,” he said. 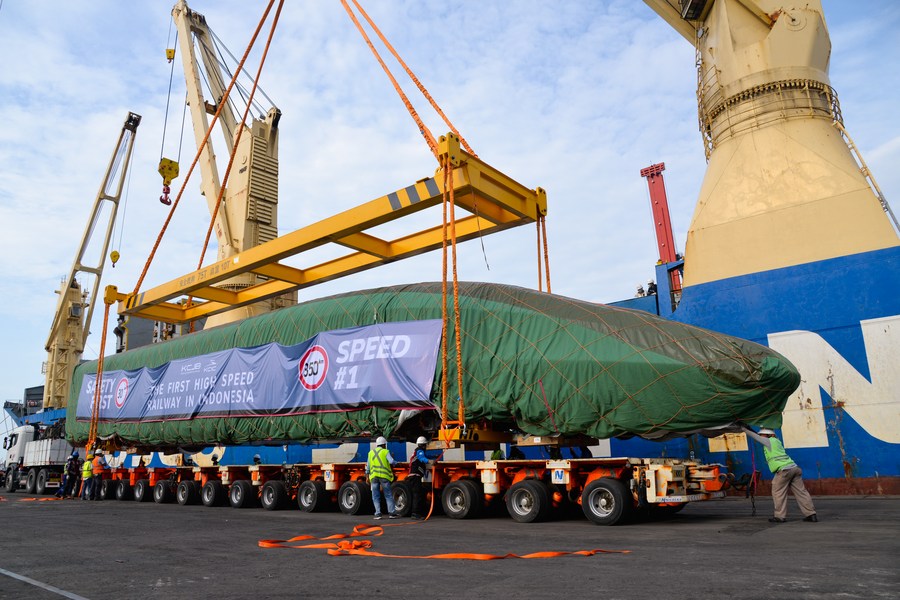 Photo taken on Sept. 2, 2022 shows a high-speed electric passenger train, customized for the Jakarta-Bandung High-Speed ​​Railway, being unloaded from a ship at Tanjung Priok port in Jakarta, Indonesia. . (Xinhua/Xu Qin)

The Belt and Road Initiative is an important path towards realizing this vision, Hatoyama said, adding that the initiative will help promote regional economic development and exchanges between countries, effectively preventing disputes.

Pointing to a Chinese calligraphy on the wall of his office in Tokyo that reads “Brotherhood”, Hatoyama said he upholds the spirit of brotherhood and has always advocated the establishment of an Asian community of the East, “whose vision, in my view, has much in common with the concept of an Asia-Pacific community with a shared future.”

“Asia is one and it is very important to create a sense that Asian countries share a common future,” he noted.

When Hatoyama reviewed the modern history of Asia, he said that Japan once invaded the Korean Peninsula and China. Asia, which was once a battlefield, should not become a battlefield again, but a “community without war” in the future, he said.

The former prime minister said he believed that on the path to a community with a shared future, it is necessary to overcome the problem of mistrust between neighboring countries and bring people from different countries closer together.

One of the main reasons for the emotional barriers between Japan and its neighbors are historical issues, and Japan should face historical facts, he said.

Asian countries share common concerns in economy and trade, education, health care, sports and environmental protection, Hatoyama said, noting that discussions and exchanges in these areas for forging an integrated community in various fields are very important for Asia. Regarding the Regional Comprehensive Economic Partnership (RCEP), which came into effect earlier this year, Hatoyama said he believed it had provided the economies concerned with common ground for trade and was very beneficial to the economic development of the whole of Asia-Pacific. Region.

Hatoyama, 75, also president of the East Asian Community Institute, served as Japan’s prime minister from September 2009 to June 2010. During that time, he attached great importance to relations with China and pledged to promote friendly exchanges and cooperation between Japan and China. since leaving office.

The former Prime Minister fully agrees with the idea that “friendship between peoples is the key to healthy relations between states” and expressed his willingness to do something for the exchanges between the peoples of the Japan and China. To this end, Hatoyama frequently travels between the two countries.

During his visit to China in January 2013, Hatoyama visited the Memorial Hall for Victims of the Nanjing Massacre by Japanese invaders. He apologized for the crimes committed by the Japanese soldiers and sincerely wished that such historic tragedies would not happen again.

Hatoyama recalled seeing the statue named “Peace” of a mother holding a white dove in front of the memorial hall and himself planting a ginkgo tree there as a symbol of peace.

“I will always cherish this name with its symbolic meaning and push Japan to face up to history and cherish peace,” he said. ■

The true meaning of empathy

Rita Hagen Do you know the difference between empathy and sympathy? According to Dr. Brene …