In the more than a decade since reactors at the Fukushima Daiichi nuclear power plant exploded, nearby Futaba has been trying to mend the pieces of a community shattered by the disaster.

Today, young people from other parts of Japan and beyond are playing a role in resurrecting a community with which they have little connection.

Since last year, Tohoku University undergraduate student Masayuki Kobayashi has teamed up with his Indian classmates and a Futaba-based association to rehabilitate the city’s tarnished image of the Fukushima prefecture.

They are expanding their network to involve people of various nationalities, ages and skills, many of them young and with no direct connection to the disaster area of ​​northeast Japan. They aspire to attract tourists and develop sustainable local businesses.

Tatsuhiro Yamane (behind, right) details the events of March 2011 to participants of a walking tour in Futaba, Fukushima Prefecture on May 8, 2022. (Kyodo)

Soon, Futaba could be inhabited again, with an evacuation order for the base to rebuild and revitalize the town set to be lifted perhaps as early as July. But the challenges are not lacking.

“It was said that the city was impossible to recover, but if we can achieve this goal, we can tell the world that nothing is impossible,” said Kobayashi, 22, whose involvement in Futaba began with a visit local walk he joined last time. year.

Joining Kobayashi in the cause are Trishit Banerjee, 24, and Swastika Harsh Jajoo, 25, who are doctoral students at the same university in Sendai, Miyagi Prefecture. All three are interns for the Futaba County Regional Tourism Research Association.

As Futaba sees an exodus of its residents, estimated at around 7,000 before the March 11, 2011 earthquake, tsunami and nuclear disasters, Kobayashi is determined to change perceptions of the city.

“If we can do more fun activities, then a more diverse array of people will come,” said Kobayashi, whose brainchild, PaletteCamp, is suited to that purpose.

The idea of ​​the camp is to get people to interact with the local community through tours focused on Futaba and nearby areas, using fun activities like yoga to learn about local culture and history , instead of disaster-focused tours.

PaletteCamp has been held three times since October last year, most recently in May.

Ainun Jariyah, a 21-year-old Indonesian on her first trip to Futaba, was among about 15 participants in the latest program which included a bingo quest game in Namie, near Futaba, to showcase the local culture and history of the city, and a walking tour in English and Japanese in Futaba.

The group was struck by the contrast seen in the streets of Futaba with the decrepit houses and vacant lots juxtaposed by walls bearing refreshing and uplifting works of art.

“I learned that art can be used for peacebuilding and reconciliation and to empower people,” Jariyah said.

Jajoo, who provided the English translation to Jariyah and a few others, couldn’t be happier to hear such comments. She wants camp participants to take advantage of the playful elements “without imposing” the educational aspect.

Tatsuhiro Yamane, head of the association which supports the three in their project and guided Kobayashi on his walking tour, said that if the social infrastructure is in place, we can encourage more people to return or live in the region.

Yamane, 36, also stressed the importance of having successful small businesses with deep roots in the community while seeing the potential for tourism in a town that has long depended on the nuclear power plant for its livelihood.

Yamane, a former Tokyo resident who eventually became deeply involved with Futaba after his post-reconstruction role there, is now a member of the city assembly. He said progress in hard and soft infrastructure is crucial.

“We have to be able to build a lot of things at the same time. It’s not enough to build one building,” he said. “The key is to create a community that can use this structure.”

Jariyah and her fellow attendees may have finished their PaletteCamp tour, which ended with a brainstorming session on how to grow Futaba, but their connection to Futaba didn’t stop there.

They kept in touch online and are now studying a project to make cookies with the Futaba “daruma” (Japanese doll) design, which is the symbol of the city, to possibly sell them as souvenirs. The group has also published newsletters, both in Japanese and English, in print and online, to present stories of daily life in Futaba.

Banerjee thinks their work to help rebuild Futaba is something “that most cities in the world don’t get the opportunity to do”.

“We’re able to create a story that here’s a city and here’s something you can do against the impossible and we can do it together,” he said.

As the three students visit Futaba from time to time from Sendai, former resident and musician Yoshiaki Okawa keeps the memory of his hometown alive through his performances across the country. 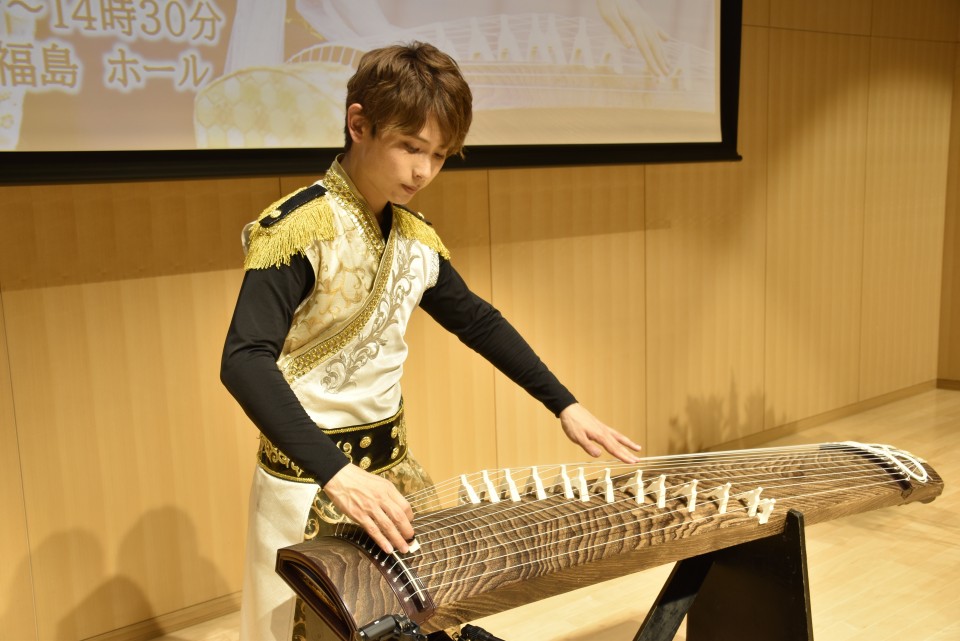 Okawa, 26, was fresh out of his junior high school graduation ceremony when disaster struck in 2011. His family had to evacuate and they settled in Saitama prefecture north of Tokyo, where he attended high school and fell in love with the “koto”, a traditional Japanese stringed instrument related to a zither.

“At the time, I didn’t want people to know that I had been evacuated from Fukushima. I was still in pain and didn’t want to talk about how I felt. I wanted to lay low.”

During his performances, he often talks about his love for Futaba and its idyllic setting and how the place inspired his music. Some of his compositions are a tribute to those affected by the 2011 disaster.

Okawa hopes her music will encourage people who are still hurting and struggling since 2011 to “move forward.”

Her home in Futaba was demolished after their family decided not to return. Even so, he said, through his music, “I would like to help mend people’s hearts. I feel like I can do it even if I’m not there.”

Residents of Fukushima village allowed to return after 11 years