An evacuation order in a city housing the crippled Fukushima Daiichi nuclear power plant was lifted on Tuesday for the first time since the March 2011 disaster 11 years and five months ago, as the municipality prepares for the return of some of its inhabitants.

The order for the city in Fukushima prefecture, home to the Tokyo Electric Power Company Holdings Inc. complex, was imposed after the massive earthquake and tsunami hit the northeast of the country, triggering reactor meltdowns and rendering the area uninhabitable due to high radiation levels.

Photo taken by a drone on June 25, 2022 shows an area that reopens to residents at midnight on August 29 in Futaba, Fukushima prefecture in northeast Japan, with the JR Futaba station seen in front and the nuclear power plant of Fukushima Daiichi at the rear. (Kyodo)

Futaba is the latest municipality to see an evacuation order lifted among 11 municipalities subject to such orders following the disaster. Although residents are now allowed to return home, more than 80% of the municipality, in terms of area, remains designated as a “hard to return” area.

The parts reopened for habitation are located near JR Futaba Station in the city’s old downtown area and its northeast, where there are many commercial and public facilities, such as the Great East Japan Earthquake and Nuclear Disaster Memorial Museum.

With relatively low radiation levels, people had been allowed to enter the northeast area since March 2020 but not to reside there.

At the end of July, 3,574 people belonging to 1,449 households, or more than 60% of the city’s population, were registered as residents of the two areas which represent only 15% of the total area of ​​Futaba.

But the number of residents who participated in a preparatory program launched in January, allowing them to return temporarily, stands at just 85 people from 52 households.

Following the disaster, most of the inhabitants of the commune were evacuated out of the prefecture, as well as the functions of the town hall. A number of them have since settled outside the city.

While Futaba aims to increase its population to 2,000 by around 2030, a survey of residents last year found that 60.5% had decided not to return, far exceeding the 11.3% who expressed a desire to return.

As for areas other than those reopening or due to reopen, the government plans to decontaminate individual locations after confirming that residents intend to return. Futaba and Okuma, a neighboring city to the south that is also home to the crippled power plant, are expected to begin work in fiscal 2024.

Although the government said last August that it was aiming for residents to return to areas outside reconstruction and revitalization bases by the end of the decade, the outlook is unclear as areas covering more of 300 square kilometers in seven municipalities of the prefecture are designated as difficult. return areas.

In Okuma and Futaba, the return of these residents is expected to occur around fiscal year 2025 or 2026 at the earliest, given the time needed to build infrastructure, according to a government official.

Earlier this month, Futaba Mayor Shiro Izawa asked Industry Minister Yasutoshi Nishimura to “show a roadmap towards decontaminating the entire area” during his visit to Fukushima after assuming the ministerial post.

Fukushima Governor Masao Uchibori also pointed out that “the stages and scope of decontamination, as well as how to deal with the homes and lands of those who do not wish to return, have not been worked out.”

The evacuation order was lifted a day after Futaba celebrated the reopening of a residential police station located about 3 km northwest of the municipality’s nuclear power plant. 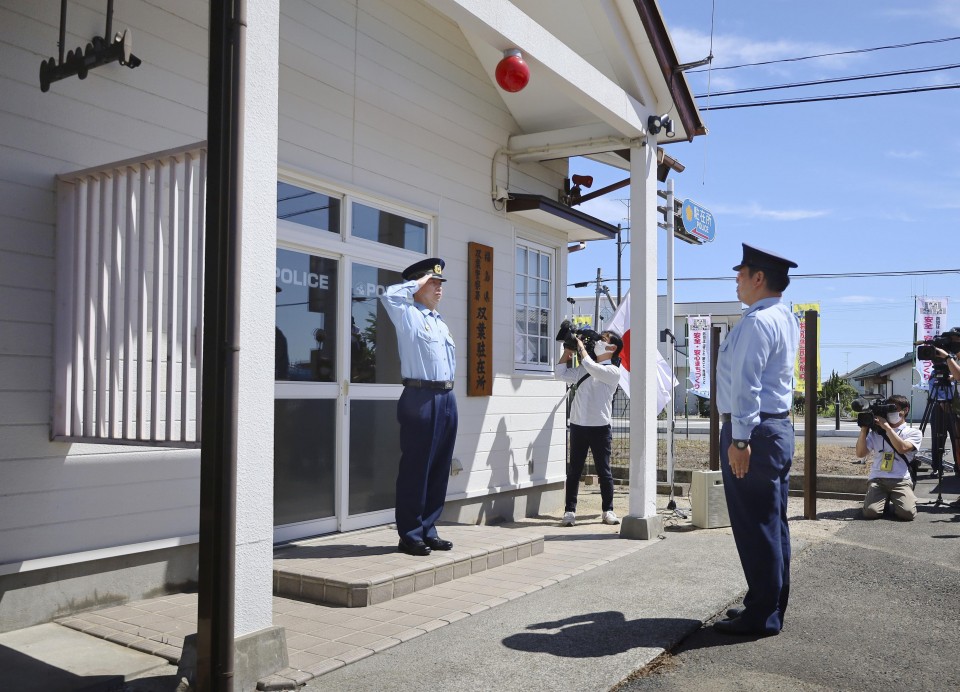 A ceremony is held to mark the reopening of a police station in Futaba, Fukushima Prefecture on August 29, 2022. (Kyodo)

The police station, which will house an officer, was closed immediately after the nuclear disaster.

“I would like to support the city by keeping the peace here so that people can return feeling safe,” said Hirotaka Umemiya, 40, as he started his duties in the city.

A separate ceremony was held on Saturday for the opening of the new Futaba Municipal Office, which was temporarily located in the nearby city of Iwaki, which is expected to begin operations on September 5.